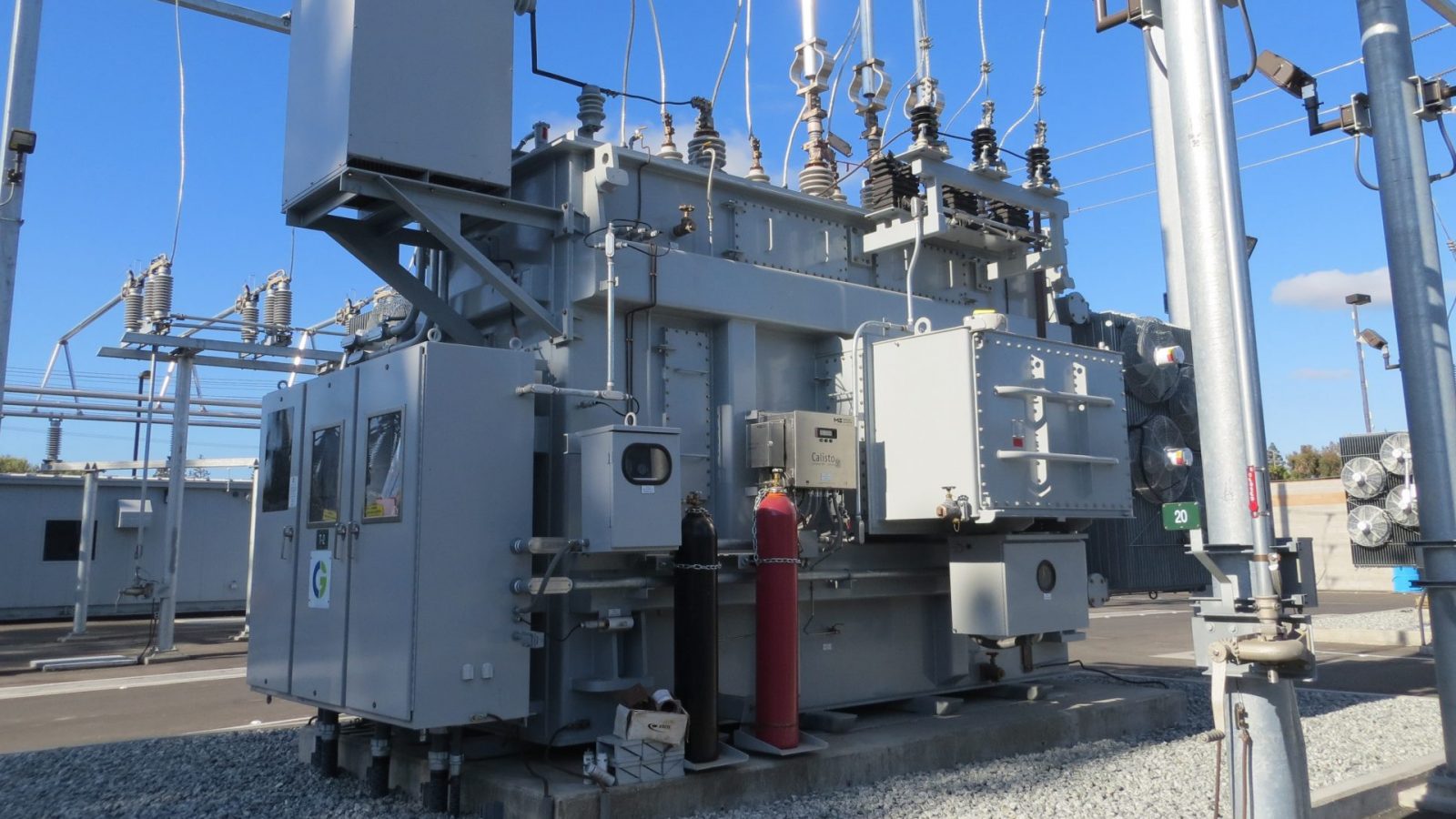 Power transformers makeup the backbone of our electrical grid. They increase and decrease voltages, as well as provide isolation circuits that are critical for electrical stability and safety. In February 2021, winter storms left millions of Texans without power and water, showcasing how instability in the grid can have drastic consequences for human life. One of the best tools to combat ageing infrastructure is to frequently test the equipment to predict and prevent failures before they happen. In this article, I’d like to focus on transformer testing and answer these questions. How do we test transformers to ensure they are safe to operate? How can we predict transformer failures? And what do we do if the methanizers used for testing transformer oils are constantly failing? 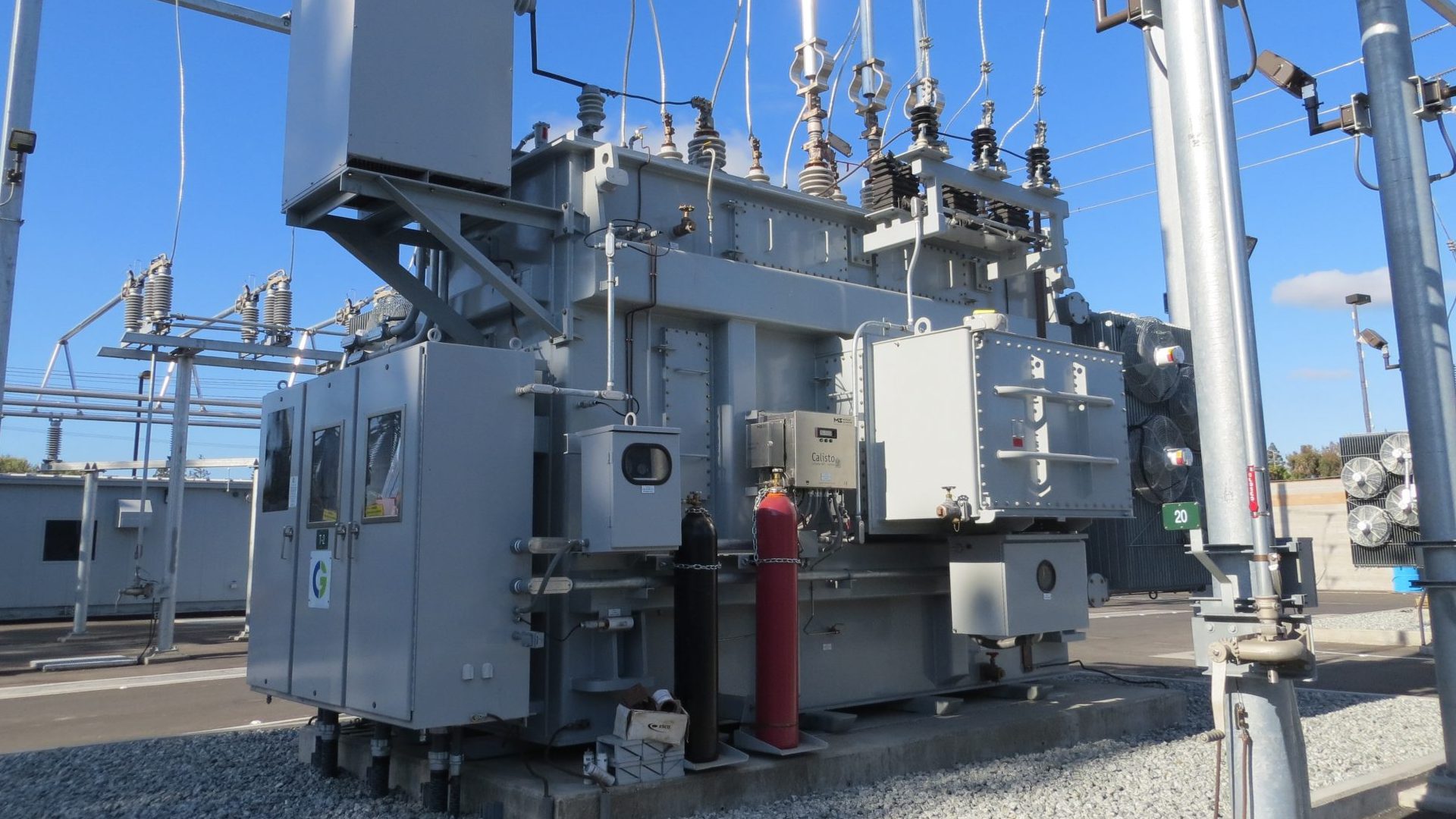 The Why:
So first off, why do we test transformer oils? Well, as power transformers age, components within the transformer can deteriorate leading to poor performance, faults, and possible explosion. Dissolved gas analysis (DGA) is the best method for assessing the transformer’s condition and predicting impending faults. This involves the analysis of the concentration of several light gases present in the oil including hydrogen (H2), nitrogen (N2), oxygen (O2), carbon monoxide (CO), carbon dioxide (CO2), acetylene (C2H2), ethylene (C2H4), ethane (C2H6), propylene (C3H6), propane (C3H8), and butylene (C4H8). An excellent review of the cause and effect of failures on the gas concentrations can be found here.

The How:
Transformer oil analysis involves the analysis of the gases dissolved in the oil using a laboratory instrument known as a gas chromatograph (GC) equipped with a flame ionization detector (FID) and thermal conductivity detector (TCD). The most common method is usually something similar to ASTM D3612-C. The D3612 method actually consists of three variants (A/B/C) and is 22 pages in length. The ‘C’ variant is the most common and involves heating the oil to release the gases and then injecting those gases that equilibrate above the oil. This is known as ‘headspace’. The gases are then injected onto the GC and separated using two columns, a molecular sieve 5A plot column (30 m × 0.53 mm × 50 µm) and a Carboxen-1006 column (30 m × 0.53 mm). The TCD is used to detect H2, O2 and N2, while the FID is used to detect everything else. Since an FID does not normally detect CO and CO2, a methanizer is used to react CO and CO2 to CH4, which will respond in the FID. A methanizer is a catalytic reactor that uses heat and H2 to break carbon-oxygen bonds and hydrogenate them to form water and methane. 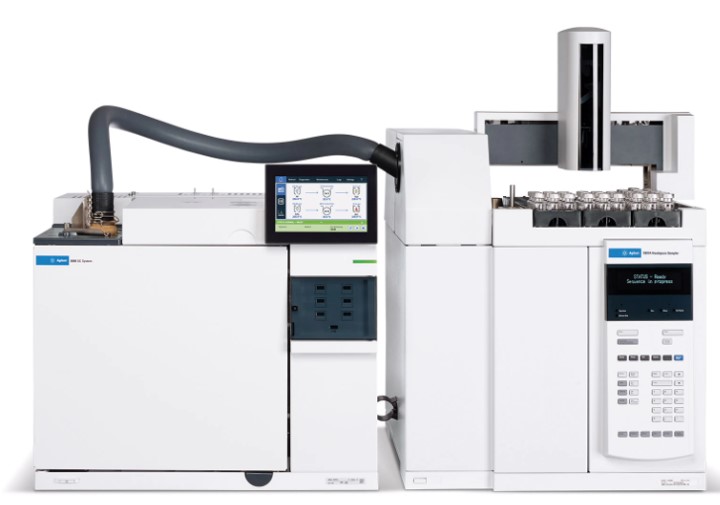 The Problem:
This test method normally works very well for quantifying the dissolved gas species in transformer oil. Unfortunately, we hear from many customers that their methanizers are repeatedly failing, meaning they stop being able to convert CO and CO2 to methane. Some customers report that these methanizers are failing 1-2 times per week! To understand why the methanizers are failing it helps to understand how they work. A methanizer is typically a nickel-based catalyst deposited on diatomaceous earth (aka silica made from diatoms). This catalyst is usually packed into a ¼” OD tube with quartz wool on either side to hold it in place. This design has remained essentially unchanged for the last 60 years and is still common today. The problem is that nickel isn’t a particularly good methanation catalyst and it is very susceptible to poisoning (not to mention it is actually poisonous to humans!). So what appears to be happening with transformer oils is that the presence of certain compounds in the transformer oil gas, possibly sulfur-containing, are binding to the nickel in the methanizer and blocking active sites. This prevents CO/CO2 methanation and leads to inaccurate results. The symptom of the problem is that the CO and/or CO2 peaks start to decrease and eventually disappear altogether. The operator will typically run a check standard before and after a large sequence, e.g., 50-100 samples. When the operator notices the problem, it is too late, and the entire sequence of samples must be rerun after replacing the methanizer with a new one. 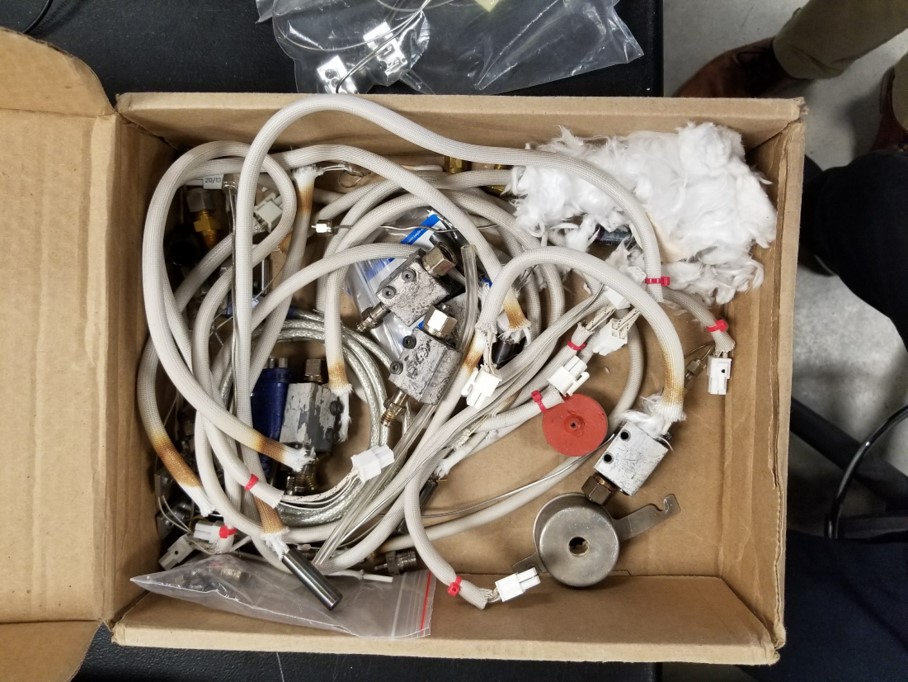 Fig 3. A box of broken nickel catalyst methanizer parts from a TOGA lab

Once a methanizer fails, the catalyst must be removed and replaced with a fresh one. This process can be cumbersome and time consuming. The average user takes somewhere between 3-5 hours to replace the catalyst in a nickel catalyst methanizer. The procedure for replacing the catalyst involves cooling down the catalyst (~1 hr), disconnecting the gas/column lines, removing the mineral wool insulation, and removing the reactor from the GC. Once the reactor is removed from the GC, the technician must disconnect the compression fittings from the body of the reactor – these fittings are often stuck together from the heat cycling and may break during disassembly. Then the old catalyst must be removed and disposed of in a hazardous metal waste receptacle suitable for nickel dust. The technician can then carefully place quartz wool at a pre-determined depth into the ¼” reactor, add fresh catalyst and pack quartz wool on top. The technician then re-assembles the reactor, places it in the GC, surrounds it with insulation, connects the gas and column lines, pressurizes the system and checks for leaks, and activates the catalyst by heating in H2 for several hours. During the process of replacement, it is common for one or more parts to break including the compression fittings, weldment, temperature sensor, and heater.

The Solution:
The solution to frequent failures is to use a methanizer that was designed to handle difficult samples and resist poisoning, even by sulfur. The Polyarc reactor is the latest innovation in methanizer technology and was designed to handle all organic compounds. It uses a two-stage combustion-reduction reaction system that first chews up heavy molecules and converts/combusts them to CO2 and then subsequently reduces the CO2 to methane. This process eliminates the concern of heavy molecules damaging the catalysts and the catalysts are all naturally sulfur resistant (as well as resistant to other poisons such as water, oxygen, chlorine, and more). In fact, the Polyarc reactor is being used in transformer oil analysis labs around the world and has demonstrated at least a 10x increase in lifetime relative to the legacy nickel catalyst technology even on the toughest samples. Check out the application note below! Furthermore, the Polyarc was designed for easy replacement. The technician simply needs to cool and disconnect the Polyarc, and swap in a new replacement. The technician can then send the old one back to ARC for a catalyst change. This keeps the price low, while giving the technician more time, better performance, and more consistency. 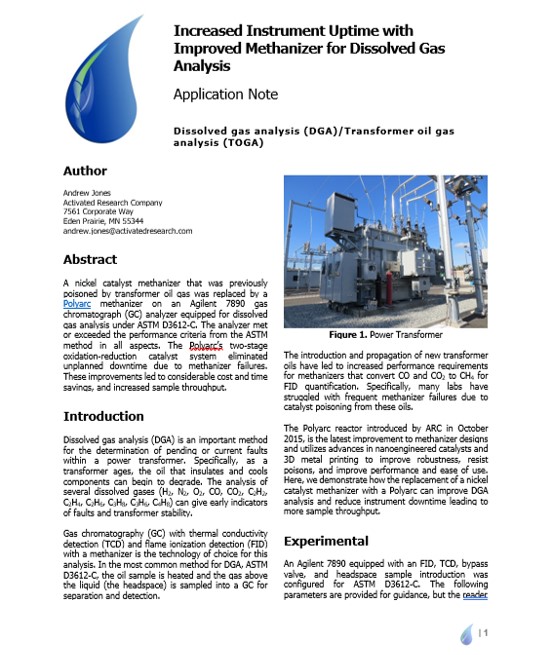 The Economics:
Next we discuss the economics of switching from a nickel-based methanizer to the Polyarc. Laboratories we spoke with that were analyzing the worst samples were seeing nickel catalyst failures 1-2 times per week. But on a lab-average methanizer failures were at least once per month. Switching to the Polyarc enables a >10x increase in lifetime, but most labs choose to proactively replace the Polyarc at a given interval, most commonly every 6 months. Using these numbers, we can build an economic model that estimates the operating cost for both methanizers.

Over the course of a year the nickel catalyst leads to much higher costs for the company. The increased cost comes from the increase in time to replace the nickel catalyst when they break and from the loss of throughput due to the need to rerun samples after a failure. Here we see a nearly $90k per year per GC savings by switching to a new two-stage methanizer that can last longer and lead to more uptime. Obviously, these numbers will not be the same for each lab, however, this economic exercise helps illuminate the consequences of methanizer failures and how they can affect the company’s bottom line. 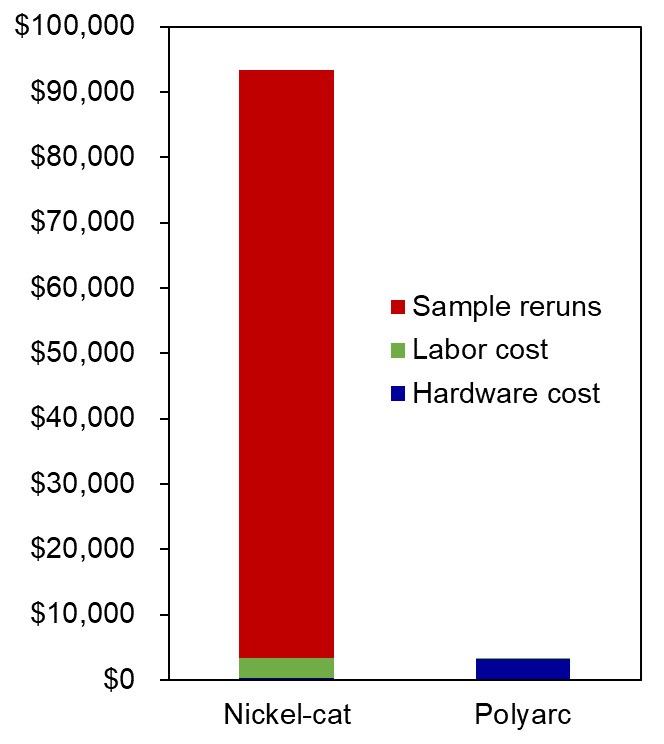 Contact ARC today for all your methanizer related questions.